The Ending Of Lightyear Is An Existential Nightmare

Apart from the idea of sentient everyday objects silently watching us get undressed every day – and also the philosophical questions raised by the existence of Forky – the Toy Story movies generally aren’t full of existential terror. But we can’t say the same for Lightyear, which, as we all know now, is the (implausibly wholesome) movie-within-a-movie adored by Buzz and Woody’s child overlord, Andy.

The beginning of Lightyear finds the titular Space Ranger screwing up and marooning his crew on a distant planet. In order to fix this dire goof, he continually troubleshoots a new hyperspace drive to get them all home – which leads to a time dilation hiccup, meaning that every time Buzz takes a test flight, decades pass for everyone else. So depressingly, all his closest friends eventually wither and die in his absence. Again, this is a friggin’ Toy Story movie.

Most messed up, though, is the third act twist involving the evil Emperor Zurg, who historically has always been simply a generic, Darth Vader-esque enemy in the world of the Buzz Lightyear franchise. But in Lightyear, we learn that Zurg is really … Buzz Lightyear himself? Or, more specifically, an older version of Buzz from the future who figured out a way to travel backward in time. “Zurg” has a plan to go back even further in time and stop himself from marooning his crew in the first place.

Buzz disagrees, realizing that this will wipe generations of people from existence. So the third act of the movie literally involves Buzz fighting against himself, as if he were Bruce Willis in one of several movies. Lightyear seems to be about the importance of learning from mistakes and accepting your own human fallibility – which is why Buzz’s enemy is a literal manifestation of his own embittered inability to forgive himself. Which is all pretty intense for a movie that’s ultimately about a seven-inch plastic man.

For movie and TV geeks, the Cracked Movie Club is full of nerdom, trivia and recommendations. Subscribe now!

Clifford the Big Red Dog brings the loveable/terrifying blood-red pooch to the big screen with a story about … an evil biotech company? Yeah, despite the fact that Clifford grows in proportion to how much he is loved, his freakish measurements attract the attention of the CEO of Lyfegro, a company intent on cracking the science of giant food production via ethically-dubious experiments that involve playing God and monkeying with DNA. Why exactly they made a two-headed goat, for example, is never fully explained.

Lyfregro eventually catches wind of Clifford and conspires to abduct him. Why? Because his growing powers – which remember are supposed to be magical – are also apparently a quantifiable genetic abnormality that can be exploited for profit. Lyfegrow convinces the cops that Clifford is their property, prompting the Chief of police to call for the capture of Clifford the Big Red Dog by invoking “the unofficial slogan of post-9/11 America” for some baffling reason.

Beethoven – I mean, Clifford is taken to a secret facility and eventually rescued by his family seemingly moments before he’s about to be vivisected by curious scientists. This seems especially crazy considering this is all based on a children’s book predicated on the simple idea that “a large colorful dog would be fun to ride” is an appealing sentiment for a children’s bedtime story.

They free Clifford, plus all the other captive mutant animals – who immediately start attacking everybody.

It’s truly just a music cue away from being a full-blown horror movie.

Related: How a Biotech Company Almost Killed The World (With Booze)

Continuing the story of everyone’s favorite blue, hedgehog-like (likely cocaine-powered) alien, Sonic the Hedgehog 2 understandably has a lot of peculiar story elements – not least of which is the revelation that Knuckles’ entire family was murdered by Sonic’s adoptive family of Imperialist giant owls.

Also disturbing: the B-story involves a wedding between Rachel (Sonic’s adoptive human mom’s sister) and her fiancé Randall. While it all seems fairly typical, albeit stressful, about halfway through the movie Sonic and Tails burst through a portal, prompting all of the wedding guests, Rachel’s fiance, and even the priest to whip out guns. Yeah, it turns out that they’re all part of a new task force known as Guardian Units of Nations (or G.U.N. for short), working on a mission to capture Sonic dubbed “Operation Catfish.”

Yup, an agent went undercover as a random woman’s boyfriend, pretended to fall in love with her, presumably had sex on multiple occasions, and even agreed to get married, all because there was a slim chance that it might, one day, lead to the arrest of Sonic the Hedgehog. We’re pretty sure there was no combination of buttons in the Sega game that would end up emotionally traumatizing an innocent woman for no good reason.

Related: Not Only Did ‘Sonic The Hedgehog’ NOT Suck, Sonic 2 Might Be Better

Fantastic Beasts: The Secrets Of Dumbledore Is About Election Fraud And Teen Pregnancy

What was once the simple story of a boy wizard who fled an abusive household for an alarmingly hazardous boarding school has now yielded a wildly convoluted prequel series; the latest Harry Potter spin-off, Fantastic Beasts: The Secrets of Dumbledore, is less about magical wizard adventures than it is … the rise of fascism in the 1930s? Oh, and the titular “secrets of Dumbledore” are that he A) may have accidentally killed his own sister, and B) was aware that his brother impregnated his teenage girlfriend and the resulting baby was the killer smoke monster guy played by (sigh) Ezra Miller.

But most of the movie is about Dumbledore’s ex, Grindelwald, and his scheme to rig an important election, which involves stealing the magical creature that determines the Wizarding World’s next (heavy sigh) Supreme Mugwump. See if you can pick up on the film’s subtle visual references to 1930s German authoritarianism …

Apparently, wizards don’t actually cast votes for their leader, they all just leave it up to the Qilin, which has the ability to sniff out which candidate is a jerk and which isn’t. It’s basically like if we used the rules of Groundhog Day to decide federal elections – which, come to think of it, is slightly less dumb that the electoral college system.

But Grindelwald figures out a way to cheat by killing and resurrecting the Qilin, which becomes under his control – and somehow, no one in this world where everyone uses powerful magical spells 24/7 ever anticipated that someone would try to use magic to cheat in an election? Seriously?

This puts the protagonists in the unfortunate position of having to essentially storm the Wizard capitol to stop the peaceful transfer of power, with only cockamamie conspiracy theories about election fraud as evidence.

But no one really talks about this because it’s only like the 500th most tone-deaf thing J.K. Rowling did this year.

With Secure Diffusion, you may perhaps hardly ever imagine what you see on the internet once again

Mon Sep 12 , 2022
Enlarge / Did you know that Abraham Lincoln was a cowboy? Steady Diffusion does. Benj Edwards / Steady Diffusion AI picture era is right here in a major way. A freshly launched open supply graphic synthesis design called Secure Diffusion makes it possible for any one with a Computer system […] 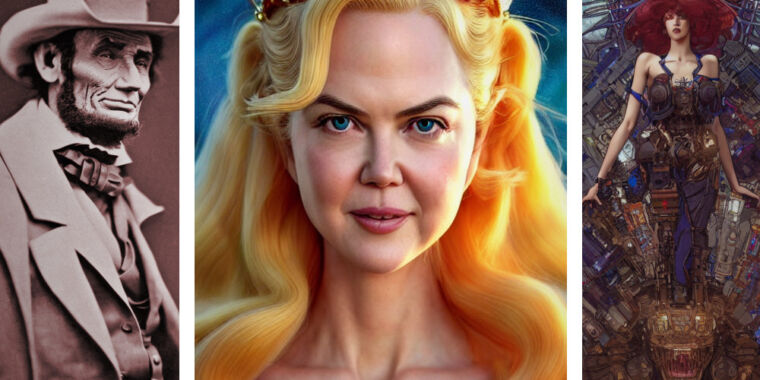