Skip to content
Writer and National Geographic Society Explorer Paul Salopek’s Out of Eden Walk is a 24,000-mile storytelling odyssey across the world in the footsteps of our human forebears. He sends this dispatch from Yunnan Province, in China.

Long periods dedicated to foot travel can induce various states of mind. One, for better or worse, is self-reflection. In the words of Mohamad Banounah, my indomitable partner on a blistering walk through Saudi Arabia: “It is crazy, man—always thinking, thinking, thinking, and always seeing a movie of my life playing over and over inside my head.” We edit these movies ceaselessly. We are, to tweak a poet, the directors of no other movie except the one we star in, and, polishing with our minds, make. And then one day, you meet a professional projectionist like Zhang Yin Hua.

I spot Zhang by the roadside in Maidilong, a village in Sichuan Province so cinematically bereft that the nearest indoor theater is a three-hour drive away on a dire mountain road. Zhang is a small, intense man recording an equally small, intense calamity with his mobile phone: A vendor’s stall is burning in the tiny marketplace. Zhang, of the Pumi ethnic minority from the eastern Himalaya, looks like a typical farmer from the highlands of southwestern Sichuan. His face is baked into a leathery mask by years of sun. His hands are gnarled. Yet he dances, catlike, around the smoky electrical fire. He darts among his neighbors, who form a chaotic bucket brigade, carefully framing each of his shots with the focused eye of an auteur.

“I love movies,” Zhang explains sheepishly, waggling his battered phone. “But I don’t really make them. I only show them.”

Zhang has, to be precise, exhibited hundreds of films to thousands of local villagers. He has done this for more than a quarter century. Courtly and weather-beaten at 56, he is among the last of a fabled breed of showmen in rural China: a member of a fading guild of state-trained cineastes who travel through isolated communities, illuminating outdoor screens with movies, for free, at nighttime public squares. In his early years, Zhang lugged an old reel-to-reel projector by foot and horseback. Lately, he journeys by car. He can recite all the lines from decades-old patriotic classics like The Long March and Third Sister Liu. Since the reforms of the 1980s, his nomadic marquee has expanded to include lighter, purely entertaining movie fare. Between the main features, Zhang shows public service videos about HIV-AIDS, forest fire prevention, village sanitation, and demon drugs.

“It is hard work,” Zhang admits. “The roads here are bad. I get tired. But when I play the movies, the public is so happy and satisfied. This gives me encouragement.”

Zhang invites me home. In a storage room off his farmhouse courtyard, where ears of orange corn lie drying, he unstacks towers of bulky projector cases: the cinematic archaeology of his life.

“I will never part with these for any amount of money,” he says, reverently unpacking a small white projector from the 1970s, then a blue one from the 1980s. “These are a part of my life forever.”

He is somewhat less misty about a brand-new machine that projects digital imagery.

“With the old projectors, you had to stand next to them during the whole film. You had to keep adjusting the focus,” he says he says, like a proud Vaudeville campaigner. “On this new device, you just pop in the memory card, and it starts on its own. You can even leave to have tea or go to the toilet.”

Undercut by years of competition from television and smartphones, Zhang’s movie circuit is more modest these days.

Once a month, he visits only four villages in the surrounding Hengduan Mountains. Much of China’s countryside has emptied from urban migration. Local audiences have aged and dwindled. And the lure of communal movies in village squares, under the stars, where moths blaze like comets through the projector’s light, has been supplanted by kids absorbing TikTok on palm-size screens. Zhang is obliged to snap photographs of the start, middle, and ending of each open-air film he projects, to prove to his government bosses that he’s still on the job.

Left: A rope bridge carries a mule over the surging Yalong River in Sichuan Province. Whenever the Yalong washed out footbridges, Zhang Yin Hua says he would pole his moveable entertainment kit over the bucking torrent in wooden dinghies. “It could take days to come and go from movie screenings,” Zhang says.

Right: During one crossing of the Yalong, here flowing gently, Zhang says he had to dive into the swirling current to rescue a folding movie screen.

For decades, government studios churned out heroic movies extolling the ideals of the revolution. (Third Sister Liu was China’s first musical, pitting a singing peasant heroine against an evil landlord.) As early as 1950, just one year after Mao Zedong’s victory in the nation’s civil war, nearly 2,000 technicians were trained to operate 16-millimeter projectors in villages across the nation’s sprawling rural hinterlands. Their ranks soon swelled by the thousands. Teams of “mobile projectionists” drove diànyǐng chē, rubber-wheeled “movie carts” pulled by mules, into the farthest-flung hamlets. Portable generators chugged out the necessary current.

Lu Xaioning, a historian of Chinese cinema at the School of Oriental and African Studies in London, notes that millions of rural Chinese from that era had never watched a film before.

“They flocked to the screenings not to be enthralled by the film narrative, but to enjoy the ‘wonder show,’” Lu writes in her book, Molding the Socialist Subject: Cinema and Chinese Modernity. Farmers entranced by the strange worlds flickering to life on a whitewashed wall occasionally “got confused with movie characters and could not tell friend from foe” onscreen. But the outdoor movies nonetheless proved enormously popular. One early projectionist in Guizho Province, Lu writes, was astonished to find an audience of nearly 5,000 awaiting him in a remote village.

He was farming in 1986 when county officials hired him part-time, between his grain plantings and harvests, to carry the 90-minute catharsis offered by three-act movies into his farming and herding neighbors’ roadless lives.

“I used horses and mules, and sometimes my own shoulders, to carry the equipment,” he recalls. “It could take days to come and go from movie screenings.”

Whenever the nearby Yalong River washed out footbridges, Zhang would pole his moveable entertainment kit over the bucking torrent in wooden dinghies. On one occasion, he dove into the current to rescue a folding movie screen.

For five glorious years, he became the most popular itinerant in the region, a craggy and ethnically diverse upland inhabited by hardy Pumi, Yi, Tibetan, and Han communities. Village children cheered his arrival. Pretty girls flirted. Old timers looked forward to dragging their stools out to gossip loudly under the night sky whenever the movie plots lagged. Then the first microwave towers peeked over the mountain skylines.

“Television came in in 1991, and that was the start of the end,” Zhang says. “Soon there were eight-track tapes, and then the Kung-Fu movies, lots of violence.”

His own favorite pictures are at least a generation old and based on antique Chinese parables. Legend of the White Serpent is a folktale about love. The Monkey Goes West riffs off a 16th-century novel about devotion and friendship. He’s seen them hundreds of times.

“I think outdoor movies may come back into fashion,” Zhang says. “People are tired of fighting over the remote control at home. They’re bored. They miss the sense of being together.”

He tells me this sitting over green tea in his living room. He wears a faded ball cap, a Tibetan-style shepherd’s jacket, and an inward expression. His wife is busy in the kitchen. Two grown daughters take turns juggling cell phones and an energetic toddler—one of Zhang’s grandchildren. A TV with a giant flat screen as wide as Zhang is tall babbles a cartoon from the corner. Nobody watches it.

Zhang walks me out of Maidilong. We raise our arms in goodbye.

At a canyon-bottom village nearby, I find the first and only inhabited place—in roughly a thousand walked miles in China—that yet remains undistracted by mobile phone and internet connections. Zhang stops there with his current selection of 48 films. Public billiard tables stand in front of small shops, free for all to use. These relics will vanish when the signals finally come. The scene of two young village men lining up shots on the sun-faded felt, I think walking by, would make a decent end to a movie.

The National Geographic Society, committed to illuminating and protecting the wonder of our world, has funded Explorer Paul Salopek and the Out of Eden Walk project since 2013. Explore the project here.
Next Post

Sun Jul 10 , 2022
Here’s some of the up-coming concerts, shows and other events coming to the Lubbock area. Keep this page bookmarked as it will be updated when more events become announced. Sunday, July 10 Concert – The Browning w/ Young Medicine, Gridiron, All Falls Down and The Light Superior Location – Jake’s […] 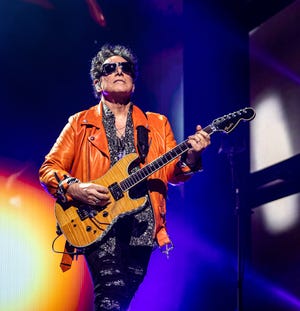