The SOS went out on IG on October 7. Artists Mary Lacy and Corrine Yonce needed material for the mosaic they were making on the Burlington bike path: “Do you have excess tiles/ plates/ plastic or rubber objects/ old kids toys/ plexi glass you’d like to have immortalized forever??” Lacy posted on Instagram.

Help arrived in the form of bottle caps, a Wiffle ball, a superhero figurine, a set of wedding plates, jewelry and tiles. The artists had already amassed a large amount of material for their piece, but the wall is “soooo B I G !” Lacy wrote on social media. They needed more. “S O SSSS,” she pleaded.

The mosaic covers the roughly 10-by-30-foot east wall of an underpass below a bridge over the bike path between North Beach and Leddy Park. Yonce and Lacy, friends as well as fellow artists, created it in five days in early October. “I fangirled Mary,” Yonce said, describing how they met about six years ago.

Yonce, 31, who lives in Winooski, is a fair and affordable housing advocate for the Champlain Valley Office of Economic Opportunity. She’s also a painter who graduated from the University of Vermont, where she studied English and art.

Lacy, 31, of Jericho, is an artist best known for her large-scale painted murals in public places, such as the hummingbird on the corner of College and St. Paul streets in Burlington. She also makes wooden puzzles for people to paint and assemble, as well as four- to five-foot wall-hung indoor mosaics, made up largely of broken dishes.

The collaboration with Yonce, which Lacy called a “looser” kind of work than her solo pieces, is her first public mosaic.

“Corrine and I have the never-ending, ongoing, artist nerdy dialogue,” Lacy said. “We can make connections in each other’s work.” The bike path project was the “aha moment of where we could collaborate,” she said.

The vibrant and sprawling mosaic faces rock cliffs, jagged and moss covered, on the west side of the underpass. The work is composed of broken plates, tiles, toys, plastic letters, bicycle parts, discarded electronics and old Long Trail bottle caps. (What will become of bottle-top street art if the canned beer trend never dies!?) Within it are discrete and fascinating images, phrases and vignettes. Two figures facing each other are prominent, along with a pair of bicycle wheels. The people appear to be fixing a flat tire. (The wheels refer to the location on the bike path, as well as cross-country bike trips each artist took before they knew each other, the collaborators said.) An iPod looks like a relic among broken tiles; a touch-tone wall phone with a 9-1-1 sticker on its receiver is mounted high on the wall, just out of reach.

Lacy scavenged the phone from her parents’ house. She said it’s “trippy” to see it in the mosaic and a little disconcerting when people ask what it is. “Am I that old?” she wondered.

The mosaic was a whirlwind of a “passion project” for the artists, Yonce said. It involved a last-minute scramble when the city changed the location about a week before they started. The artists worked a string of long days, an effort that ranged from climbing ladders and mixing mortar to creating a piece that recognized the past use of the site.

“Public art is kind of wild,” Yonce said, looking at the mosaic after pedaling to it on her bike. In making the piece, she and Lacy were guided by an on-the-spot mantra: “No time for opinions,” Yonce recalled. “We just had to stick things on the wall.” 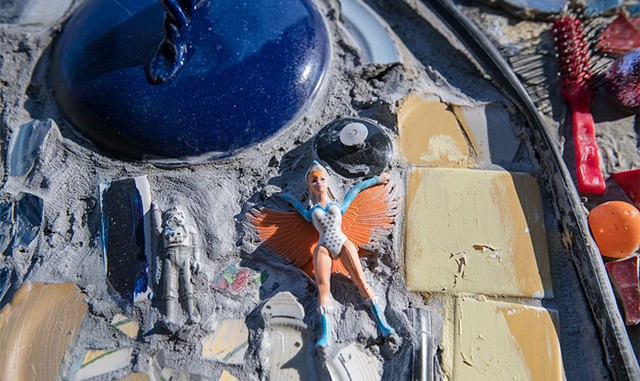 At the center of the piece is Major Jackson’s poem “On Disappearing,” printed in full on fluorescent pink plexiglass. Lines from the poem by the poet, who taught at the University of Vermont for nearly two decades, appear elsewhere in the mosaic, too, painted in black on tile: “At a glance from across the room, / I wear September on my face.”

The wall has been a favored location for people who make graffiti, and they’ve tagged it again and again. Fading tags in purple and red frame the mosaic at its top edge, along with patches of moss and a dried flower emerging from a crack.

Yonce said that while she and Lacy were working on the mosaic, people stopped and talked about the graffiti they’d seen on the wall for years. Some recalled certain paintings and tags; others thanked the artists for covering it up. The “secret” of the design, Yonce said, is that it echoes the graffiti, following its general outline and form.

“The figures fall into shapes that were left over from past hands,” she said.

Considering the wall’s history and making use of it in the current artwork were of particular interest to the artists, Yonce said.

“Those are the parts I enjoyed about the wall,” she said. Yonce described a series of design decisions — the layering of aesthetic choices — that are “piling up on each other.”

At UVM, Yonce took poetry classes from Jackson, who now teaches at Vanderbilt University. His poem about “connection to place” and the sometimes fragile nature of such connections is fitting for a crumbling wall, Yonce said. Jackson gave her permission to install the poem in the mosaic.

In an email to Seven Days, he said the inclusion of his poem is meaningful to him “exactly because the artist is a former student.”

“Corrine is a committed artist, admirably so, and I know how hard she works,” Jackson wrote. “So, it came as an honor when she asked to recycle words from ‘On Disappearing’ into the mural.”

The mosaic reminds Jackson of the work of Isaiah Zagar, a prolific and influential mosaic artist from Jackson’s hometown of Philadelphia, he wrote. The art form is “a huge pillar of my visual literacy and part of the landscape of my youth.”

Jackson recalled biking and jogging on the Burlington waterfront and wrote that he’s “looking forward to seeing [the mosaic] in person for the first time, then later, whizzing by with a fondness for all of my days in Vermont.”

The mosaic was funded by the Burlington Department of Parks, Recreation & Waterfront, which paid each artist $2,500, according to Sophie Sauve, the department’s parks comprehensive planner. Dan Cahill, the city’s land steward, said he views Burlington as a collaborator in the project, not simply a funder. 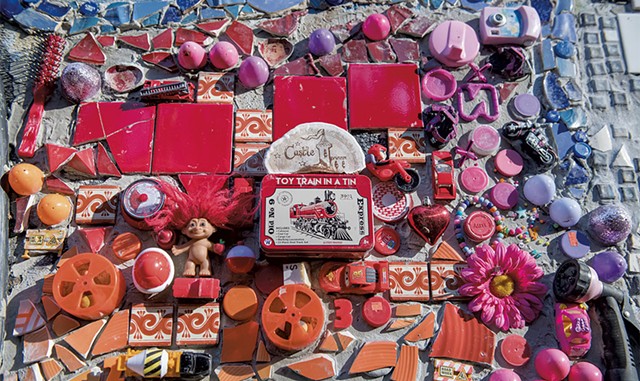 Members of his team helped prep the site, including scraping paint and power-washing the wall. They provided a tank of water for mixing the mortar. A staffer was on-site during the mosaic’s creation, serving as a kind of liaison with the public on a peak foliage weekend, Cahill said, when the artists were too busy to talk. More broadly, Cahill believes the project was an opportunity, in partnership with the artists, “to adapt our management practices from cleanup to place making.”

He estimated that Olivia Wolf, the department’s bike path and trails maintenance specialist, has painted over graffiti on that wall 12 to 15 times in the past five years. In his experience, painting a mural on a wall deters taggers. The mosaic could meet the same objective.

“I really want to credit the artists with the ingenuity to pay homage to the previous graffiti art that was on the wall,” Cahill said. “I think that’s a really beautiful honoring of the past, present and future.”

The original plan called for the artists to make the mosaic on a smaller, low retaining wall near Smalley Park in Burlington’s South End, according to the artists and Cahill. But the site was changed because the specific parks department funding required that it be made on the bike path corridor/trail system, Cahill said.

The bigger wall prompted Lacy’s SOS on Instagram. It also explains the proliferation of bottle caps in the mosaic, Yonce said: “Our loved ones were panicked for us.”

But the South End site “wouldn’t have been as mind-blowing,” Yonce said. “We’re definitely pleased — and we’re still in shock.”

Sun Dec 11 , 2022
If your idea of a bowling alley is a smoky, beer-stained gallery of grandpas in bad polyester shirts, oh, my, how the times have changed. Many modern bowling alleys boast video games, laser tag and even a full movie theater in some cases. And food options go far beyond basic […] 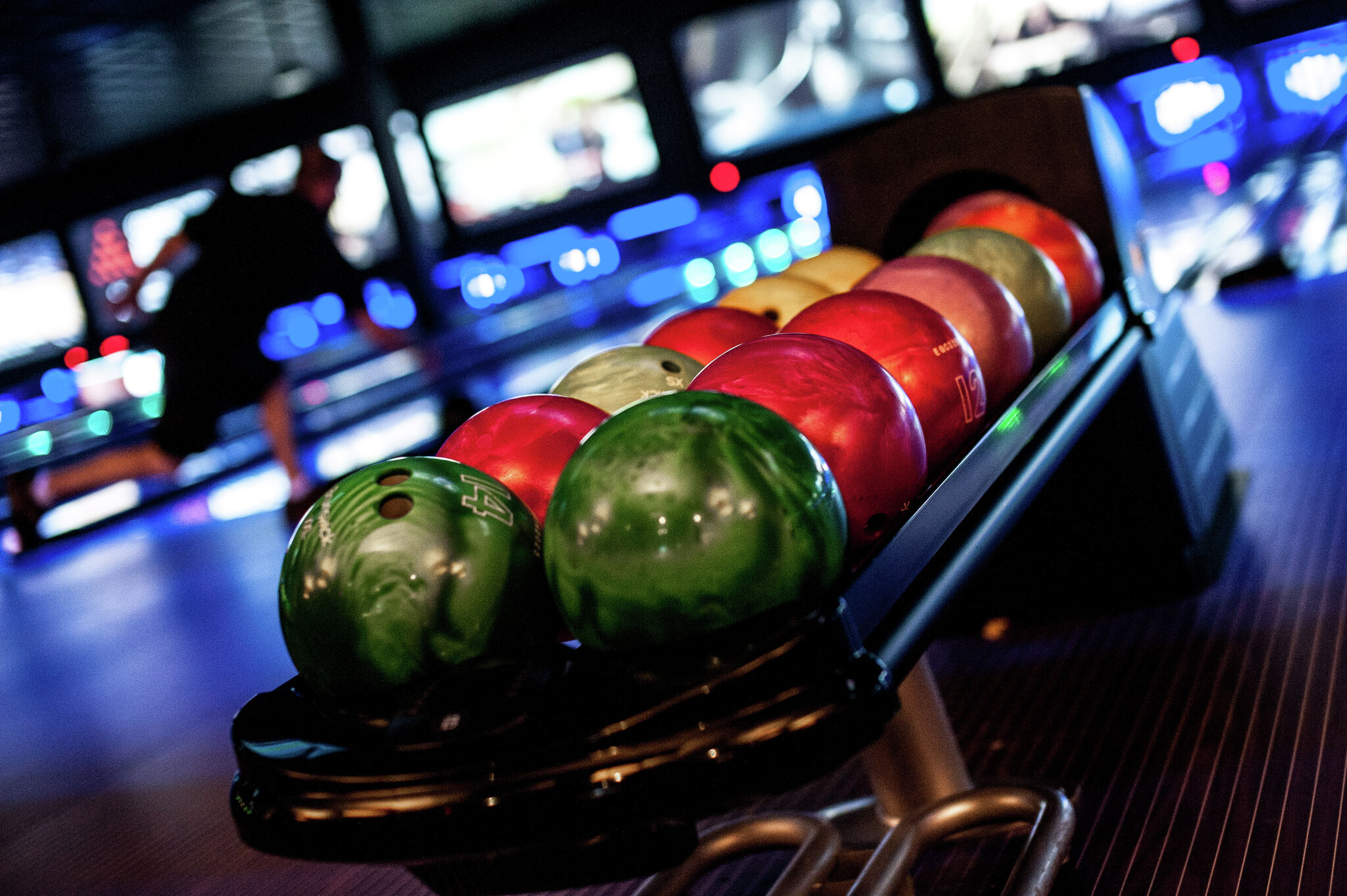